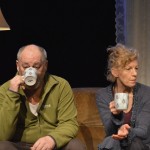 The My Arms Northern Tour kicked off last week at re:play 2013. Curated by the Library Theatre and hosted by the Lowry, the festival is a celebration of the finest fringe in Manchester.

Finishing off the festival, we were lucky enough to share the stage with All The Bens by Ian Townsend, who will be following us to the Mill at the Pier this week. Just like 24:7, where we first met the Bens, there has been a great sense of camaraderie throughout re:play. Being able to put our shows on in such an internationally renowned venue is a privilege that should inspire and encourage all members of the fringe community-we really have set the standard for fringe theatre in Manchester.

Just to back that claim, the festival received some great reviews. Julie Taylor from Whats On Stage commented on the subtle but fascinating interaction between Sue Twist and Josh Moran in My Arms praising ‘their body language and lack of eye contact [that] tells all’. Another reviewer Jildy Sauce noted the performances as ‘ terrific’ and was intrigued by James Leach’s unusual but effective chronological framing. If you managed to catch the shows at the Lowry, tweet us your thoughts!

So it is on this very, very high note that the Box of Tricks team spread My Arms across the North. This week we’re at the Mill at the Pier in Wigan and will be spending our Friday night in the Milton Rooms at Malton.

We look forward to seeing you on the road!

My Arms: From the rehearsal room
Dress Photos from the MY ARMS Tour…