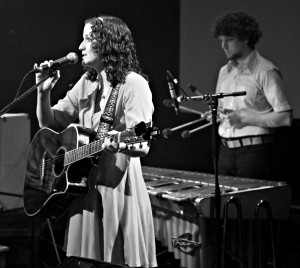 Working on Narvik has been a great collaborative process so far and I’m really grateful to Box of Tricks for taking such a free creative approach. We started the journey with a ten minute play in Everyword Festival 2013. Hannah (Tyrrell Pinder, Box of Tricks) and I had been discussing making a play with music and we jumped at the opportunity to mess about with ideas. The script and music were written within a week and the piece was presented within a small rotunda at the centre of the (then dilapidated) Old Blind School in Liverpool. We were really thrilled and surprised by the intense and positive response of the audience, and it felt like we’d hit on a really compelling central story. At that point we knew our central character Jim, we knew it was a play about the disruption of war and memory, we knew it was on some level a romance. Beyond that we wanted to tell a story about Norway, about the Arctic: an unconventional journey through WWII. The ten minute version also made it clear that the use of songs and soundtrack helped to create an intriguing non-naturalistic world, allowing the story to be told through the prism of memory while remaining very live and spontaneous.

Hannah and I then did a lot of reading… a lot! The play idea had started with stories told to me by my grandfather, who was in the navy in Norway during WWII, but we wanted to be free to create a new story. So we explored lots of other true accounts, arriving at a journey for Jim that was both a collage of lived experience and entirely fictional. We met in the Playhouse Studio in Spring 2014 to map out our play and make sure we had all the necessary research in place. By the end of the couple of days we had walls full of shipping charts and story points, and we’d worked out Jim’s war from start to finish: where he sailed, what boats he sailed on, what tribulations he met. Once we’d decided that Jim’s story was entirely plausible we were able to let go of all that historic detail and focus on the human story- the human drama.

That brought us to our week’s residence/workshop in the Playhouse Studio in May 2014 as part of the Everyman and Playhouse’s Ignition Project. Hannah and I gathered with three very talented actors, plus composers Martin Heslop and Vidar Norheim, and together we explored how the music and text could and should interact, what the most dramatic moments in Jim’s story might be, how we might move between Jim as a 90 year-old, and Jim as an energetic 20 year-old. We were setting ourselves a lot of ambitious challenges which was both daunting and really exciting. At the end of that week we had the nerve-wracking experience of showcasing the work-in-progress to an invited audience, including the live soundtrack and songs. Nothing replaces the stark reality of exposing a piece to an audience. You know when the energy dips in the room or when it picks up… you can’t deny when a joke doesn’t hit or a line feels awkward in the actor’s mouth. From the audience feedback, it immediately became clear that the music had to do something at an angle to the text, adding tension but never telling the audience what to feel. One audience member commented that there seemed to be a theme of courage and cowardice in the play but it wasn’t properly explored yet. I took on board all that and much more, and went away to write the first full draft.

And so here we are, with an amazing cast and creative team in place, about to go in to rehearsals… More than anything I’m looking forward to putting the pieces together: the music, the movement, the visuals, the storytelling, even a bit of dancing. I hope it’ll be a really lively, thrilling experience for an audience – and strangest of all I’ll be on stage as a musician every night. I can’t wait! 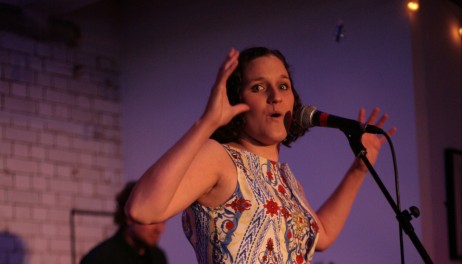 Cast announced for NARVIK!
Work Experience: My week with Box of Tricks