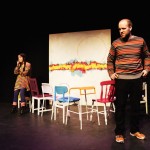 This week, Assistant Producer Charlotte Mountford moves behind the scenes to interview the team making Word:Play/NWxSW happen. First up is Designer, Rachel Wingate…

How have you found the experience of designing for Word:Play NWxSW?

It’s been a bit of a challenging whirlwind, but you’ve got to love one of them. Everything, luckily, came together relatively easily once we hit upon the idea of chairs and we’ve managed to create a versatile playing space which fits the pieces, which initially was a bit scary considering how varied the subjects of the plays are. Plus everyone involved has been super which makes the process much smoother, less stressful and creates a lovely working environment.

What is your designing process?

Design process varies a smidge from project to project, but largely will contain these steps although the order might get jumbled about a touch.

To start with I’ll read the play and find out about the piece and have a discussion with the director(or in this case directors) to find out the direction we are heading in. Then I’ll go away and do some research, collating relevant images and sharing these with the director and out of this a design will start to form. Then it tends to go onto doing preliminary sketches, and making a white card model, which once again is discussed with the director and also other members of the creative team. This means you can check that the director feels they can work with the world you are creating, but also the dream for the play is achievable in terms of cost and practicalities.

After this it’s time to make the final model which will eventually be shared with everyone and turn into the actual set. All this time the costumes are bubbling along, largely with images and rough sketches until the casting is finalised and then they develop further, but often are never 100% designed until the actors are on stage wearing them.

You work in the North (Manchester) and the South (London), how do you find the theatre scenes differ?

That’s a tricky one. I think Northern theatre is starting to rival London, just look at the productions produced by MIF. However the fringe scene isn’t quite as developed as in London, but that’s no bad thing. There aren’t really huge differences in working in the two, the most obvious being that in London it’s easier to get around when sourcing on public transport, even if you do annoy other commuters. Also I think possibly the charity shops up north are better than those down south, but in London it’s easier to find furniture and props….but I might just not be looking in the right places!

In terms of regular use, I’m trying to bring ‘swell’ back big time so I use it a lot. I think it’s a good ‘un. But in the bigger picture I enjoy onomatopoeia, knickerbockerglory and antimacassar(which in my mind is teamed with Gordon Matta Clark, long story, but a great name to say and an ace artist) just because they have a lovely rhythm to them.

I’m voting for Articulate which although not a choice is far better and vaguely related, right?! And Pictionary which me and my friends don’t know the rules for but by golly do we give it our all!

After a great first week in Bolton, Ellesmere Port and Preston, we finish out Northern Tour dates on Friday at The Lantern in Liverpool. Watch this space for more interviews with the Word:Play team and follow us on Twitter for tour updates…