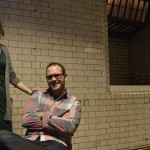 Word:Play/NWxSW – Behind the Scenes II

In the next instalment of Word:Play/NWxSW – Behind the Scenes, Assistant Producer Charlotte Mountford, grabbed the busy directing-duo behind Word:Play, grilling Hannah Tyrrell-Pinder and Adam Quayle as they set off on the Southern leg of the tour.

This is the fifth Word:Play Box of Tricks have done. Where did the original idea come from?

The original idea came about in 2007 after several conversations with writers where they had expressed their frustration at getting caught in the ‘development cycle’ with plays being read by theatres and getting feedback but never progressing any further. We were keen to afford writers the opportunity to be in a rehearsal room with actors, (and us!) but knew that writing a full length play is a big commitment, so settled on the short play format. The beauty of short plays is that writers can take risks and try out new ideas in a small space. The project was also a great way for us to work with new writers alongside ones we already had a relationship with

How is this Word:Play different?

Word:Play/NWxSW is definitely our most ambitious Word:Play yet. Not content with commissioning writers from opposite ends of the country, we also thought we’d reduce the number of actors in the company down to a core ensemble of four. This is also the first time Word:Play will tour to different venues, and we’re really excited to see the different audience reactions.

Why did you choose the word ‘Division’ as your trigger word for your commissioned writers?

We always enjoy coming up with the word of inspiration for our writers, and had a great long list of possibles this time. We settled on ‘division’ as we thought there were several ways writers could go with it (although Hannah is  sad there’s no play about maths!) and it also gave a nod to the cross regional nature of the project.

You’ve worked with a lot of great emerging writers and are advocates of new writing, how did you choose the final six writers for Word:Play/NWxSW?

The NW writers are all writers we have worked with previously or have begun relationships with since relocating to Manchester. When it came to the SW writers we got in touch with Sharon Clark at the Bristol Old Vic, James and Tara at Paines Plough and Suzanne Bell at the Royal Exchange, amongst others, and several names cropped up on more than one list so we approached them. After reading scripts from a number of writers we put together the 6 that we thought would create a balanced mix of plays. Unusually we’ve got more female writers than male writers, which is a happy accident.

How does directing six short plays differ from directing one full-length play?

We usually direct three of the plays each, and to be honest it’s pretty much the same process as directing a full length play, just truncated. We do a lot less sitting around and talking, and get the plays up on their feet pretty quickly. You have to be more decisive and also have an awareness of the other 5 plays, we start thinking about how to move from piece to piece quite early on, so bore the actors rigid with notes on moving chairs!

We do enjoy ‘serendipitous’

Crossword every time – but not cryptic, we know our limits!

For more insights from the road, follow our directors and four actors across the South West on Twitter and Facebook. In the meantime, keep your eyes peeled and sneak-a-peek back stage on the Word:Play/NWxSW tour.