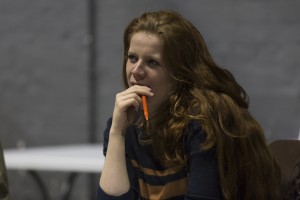 1. Tell us a little bit about your role

I’m the writer, so really I think now that rehearsals have started my role is to step back and let other people own the script. That can be quite a frightening thing because for a long time, the characters have only really lived in my head – but that’s the joy of writing theatre. It’s a completely collaborative art form. The most exciting thing for me is to see the actors and other creatives bring ideas and images and emotions that I would never have imagined to the play

The idea first came to me when I was pregnant. For the first few months of the pregnancy, I could only stomach chips and the occasional cheese sandwich. So, I was spending a lot of time in chip shops. And one night – before a Box of Tricks production actually – my husband and I ate at the Olympus Fish and Chip Shop opposite Bolton Octagon. I was immediately struck by what a fantastic place for people watching it was. I liked the idea of a story which played out while the audience ate. And straight away, I knew it would be a story about family and falling in love because for me – that’s what fish and chips are about, tradition and ritual and comfort.

Amy Poehler and Tina Fey in the hope I could bribe them into being my friends.

4. Who or what was your first love?

When I was about six, I had a really big thing for Jon-boy from the Waltons. It’s funny because in the play first love – or at least first crushes- are all about super-heroes and exhilarating bad-boys and Jon-boy Walton is very much not that.

5. Where are you most looking forward to visiting on the tour?

I want to try and see it in as many different venues as possible because what’s most exciting to me about this tour is that we’re taking the play to audiences on their own turf – to people’s local chippies or Village Halls. I’m excited to see how the play feels different in each place.

Just salt and vinegar. Anything else is sacrilege.

Chip Shop Chips tours from the 17th February to the 23rd of March. Book tickets here.