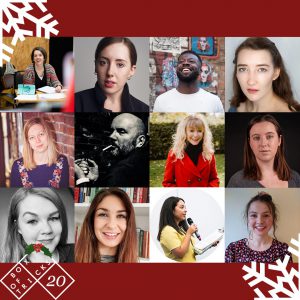 We’re supporting not one, but two cohorts of Pen Pals over the next few months with the second group of twelve writers just starting out on their writing journey.

Our Literary Associate, Al Lockhart-Morley, checked in with some of the writers and asked them to share their initial thoughts about the exciting new idea they want to develop over the next six months with support from Box of Tricks and their pals.

Conflict’ed will explore the life of a conflict journalist and what it takes to live life surrounded by conflict and war.  A life of fragmented relationships, everyday danger, learning to trust on gut instinct and sometimes doing whatever it takes to get the story.

Mikes and Cal aren’t living the dream, nightmare more like. Trouble is they don’t know if this is as good as it gets.

Nameless Girls is about two young girls who get pregnant in high school and we follow their lives throughout. They have a chance encounter with a man on the bus which changes all their lives.

“Before. Here. Now” is about a Greek Cypriot family who come to England as refugees in the 70s. It follows the women in the family through different generations exploring culture, identity, and trying to fit in.

Playwright: Bronte Appleby
Title: Have A Break, Have A KitKat

All Little Cousin wants to do is play, but Big Cousin keeps letting boring adult things get in the way. Little Cousin begs to go on an adventure into Bradford where they hope nothing will ruin their magical day.

The staff at Rosetree nursing home are facing a stressful day: yet another manager has quit just in time for a CQC inspection, and someone needs to accompany Dorothy to her husband’s funeral. When an agency nurse arrives to make up the numbers, it’s hard to tell whether it’s a help or a hindrance, especially since Denise’s grandson has chosen today to conduct interviews for his A Level coursework. And where the bloody hell IS Dorothy?! This female-centred Toast meets Dinnerladies is a celebration of female friendship and the strength it takes to care.

Based on true events, Thyme Cafe is a comedy-drama that explores the struggles of eighteen-year-old Kailey navigating life alone whilst her Mum is caught in the prison system.

Hannah wants to be anyone but herself, but she’s running out of other people to be.

The Great Size is a play with music about what tethers friends together and the power of pop music. It is heavily and shamelessly influenced by the Spice Girls.

Pen Pals will return in 2021! For more information and for updates, check out https://boxoftrickstheatre.co.uk/playwrights/playmakers/pen-pals/