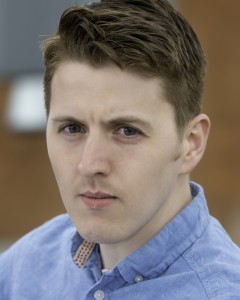 I play Jim Callaghan whose memories of his experiences during the war frame the play. It’s an absolute dream part for any actor to get their teeth into. He has some very relatable experiences as a young man that go on to influence the choices he makes out on his journey in some very difficult circumstances.

I loved being a part of the initial performance of Narvik at the Everyword Festival and for a long time after the performance the story stuck with me. I loved the world of Jim’s memory and the world of the music blending together as well as the space we performed in at the Blind School which worked beautifully. Weeks later I’d be doing the dishes or be travelling on the train and find I’d be humming a song from Narvik or have one of Jim experiences creeping into my thoughts.

I think the memory I’d most like to hang onto at the moment is when I found out about being cast in my first professional role. I’d not had a great time at university and dropped out after eight months. I was working in a call centre in the evenings and in the stockroom of a shoe shop in the day to pay off my Uni debts and was a bit fed up with being out of drama for the first time in years. I missed a call a few days after an audition whilst I was dealing with a delivery and eventually found time to sneak off to the staff toilets and listen to the voicemail. I remember doing a little dance in the toilet cubicle as I found out the company offered me the job. I felt like a huge weight had been lifted off my shoulders and the decision I’d made to pack University in was the right one for me. That was 11 years ago and I’ve been lucky to have been offered some great jobs but I’ve not done any dancing in toilet cubicles since.

The port I’d most like to visit would be Belize City. My grandfather was from Belize and worked as a seaman during the Second World War in which he was shipwrecked. He ended up settling in Liverpool marrying my grandmother but he never went back to Belize so I’d love to make the return trip for my family.

I’m really looking forward to being apart of the full realisation of the project after being a part of the shows development progress. The latest draft I’ve read is fantastic and I’m over the moon that the play is happening for all the team involved who have put the graft in to get it to this stage.

‘Always look on the bright side of life’. You can’t help but have a chuckle when you think about the final image of ‘Life of Brian’ with that song.