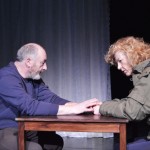 Who is a Writer’s Favourite Writer?

In the final week of its Northern Tour, Box of Tricks Assistant Producer Charlotte Mountford asks My Arms writer James Leach who his Top 5 writers are and why.

Arthur Miller
I love Arthur Miller because he can teach you about writing with your heart. He lived in a time of immense political upheaval, as his writing is informed by the Great Depression, and his views were considered very left wing. But there is a critique at the heart of all of his plays which comes from a very deep sense of morality. The two best productions I’ve seen are “The Price” at the Octagon Theatre, Bolton and “A View from The Bridge” at the Royal Exchange.

Harold Pinter
I suppose he teaches you to write with your head. He wrote “Betrayal” which is told backwards, so I obviously nicked this idea wholesale for our production of “My Arms” which is touring at the moment around the North-West.

Caryl Churchill
I need to read or re-read some of her earlier stuff. She writes about such interesting subject matters and always explores new forms every time she writes a play. I love “A Number” which is about human cloning, but shown through the lens of a father trying to reconcile with a son he experimented on. I was really pleased I got to see “Love and Information” at the Royal Court last year.

Tony Kushner
To be fair, I’ve only read one of his plays – “Angels in America”. But it can teach you so much about not being afraid of using your imagination on stage and being daring with your subject matter. Also, if you fancy writing a six hour epic, it’s okay, as long as you can make it good enough for audiences to sit through.

Anton Chekhov
I started getting into Chekhov, so I’m not sure why I like him yet, except that he’s making me think new things about what I’m doing, so that can’t be bad.

What do you think? Disagree with James? Be sure to tweet us your opinions, and don’t forget you can still catch My Arms this week at the Continental in Preston on Thursday 7th February and on Friday 8th February in Liverpool at the Lantern Theatre.

Dress Photos from the MY ARMS Tour…
Word:Play/NWxSW – Meet the Actors