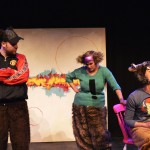 We’re catching the Tour Bus on Thursday for our final leg of Word:Play/NWxSW. We’ve had an amazing time on the road so far. Here’s a quick round-up of what people have been saying…

“These 15-minute plays are likely to be short, sharp and in some instances even shocking.” – Lyn Gardner, Guardian Guide

“A stylish cohesive production… Word:Play/NWxSW achieves its ambitions with a series of plays of which all are successful and some are exceptional.” – What’s On Stage ★★★★

“Terrific reminders of the self-contained power of the one-act genre… Four actors breathe dramatic life into the theatrical equivalent of the short story, with a simple re-arrangement of chairs providing a seamless segue between each tale – a neat directorial touch that unifies rather than divides six authors in search of their characters.” – The Stage

“Innovative Box of Tricks… Excellence of writing throughout… Acting of this quality is not always guaranteed from productions with far greater budgets – and much higher ticket prices. First-class theatre” – British Theatre Guide

“An engaging and stimulating assortment of work… Word:Play/NWxSW works well within its self-imposed parameters. The simple staging is particularly effective, using just chairs to evoke airport lounges, hospital waiting rooms and Dartmoor tors… We remain immersed in these small snippets of other lives.” – Exeunt Magazine ★★★

“[Bringing] acting and writing talent from the North West together with the South West in a positive union that can only be praised. Fans of new writing should definitely check this show out; there is something to suit everyone in it.” – Public Reviews ★★★

For full details, head over to www.boxoftrickstheatre.co.uk. Our final dates in the South West are as follows… Hope to see you along the way!

Word:Play – Behind the Bike Shed
Counter Culture Club is Coming